The Galapagos Islands. Charles Darwin, an abundance of endemic wildlife, and a bizarre documentary concerning a toothless dentist, his mistress, a family living in a cave and a pistol-wielding Baroness with two lovers. All in all, an intriguing place that we did not imagine getting a chance to see.

As we cycled closer and closer to Quito though, the more we heard about it and, sat in the cosy finca of Ron and Suzy listening to stories of their family trips, we realised that we had to take this once in a lifetime opportunity!

From the moment we arrived, we were in awe. Endemic animals with no fear mix sometimes too easily with tourists. Darwin‘s Finches and Galapagos Doves swoop in to take tidbits as a pesky pigeon or seagull would in Europe. Stepping off the boat to the mainland, the line of passengers goes slowly as, startled, people realise that, rather than rocks in the path, it is sea lions that they are having to step over. 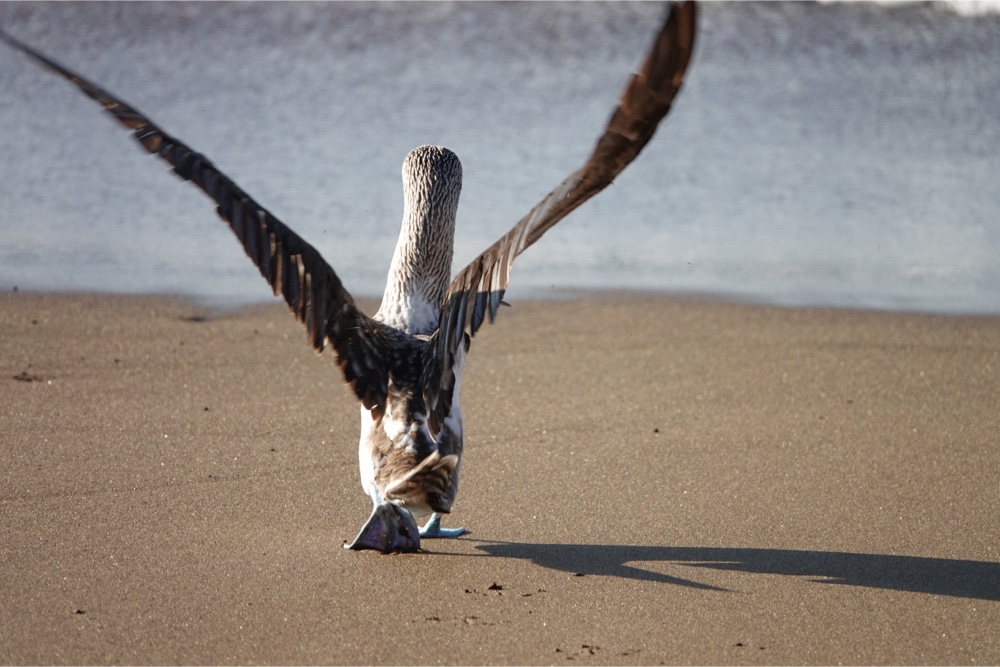 Our home for the first week couldn‘t have been more different from our tent – a 13 passenger sailing boat! 97% of the Galapagos is National Park, requiring a guide or organised tour to visit and so, by staying on the boat, we were able to travel whilst we slept and see more remote locations. On the first night, we watched as flying fish, attracted by the boat lights, were hunted by huge Galapagos sharks. 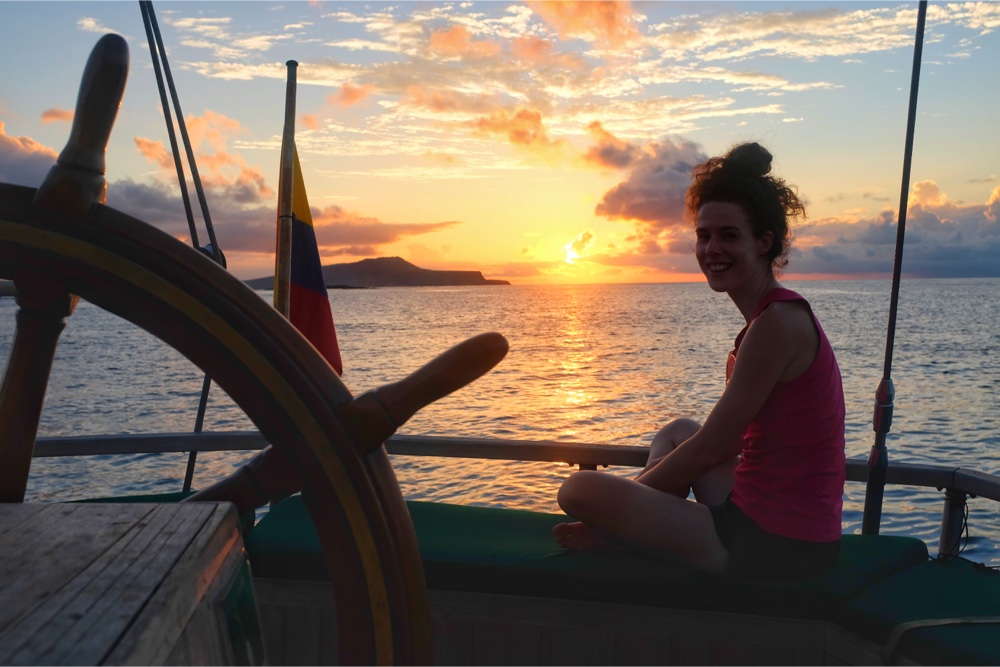 We visited rocky islands covered in marine iguanas and sally lightfoot crabs, with pelicans resting after a fishing session and bachelor sea lions posing for the camera. 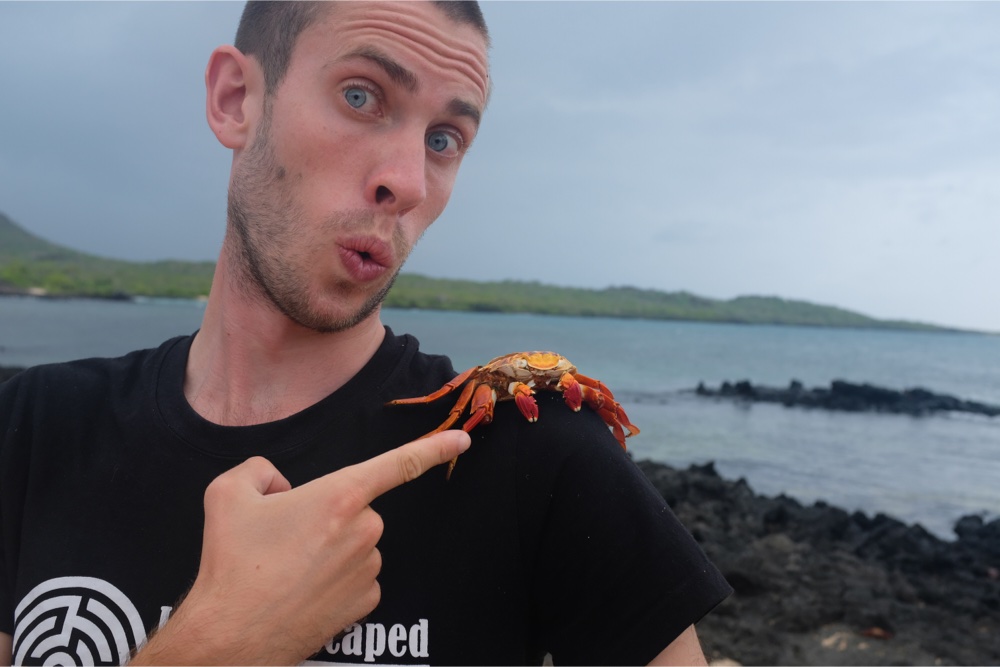 We visited volcanic baby islands, barren of growth and looking like Mars.

We visited beaches covered in sea lions and walked paths that led us to mating frigate birds and all the boobies — Nazca, Red-footed and Blue-footed. 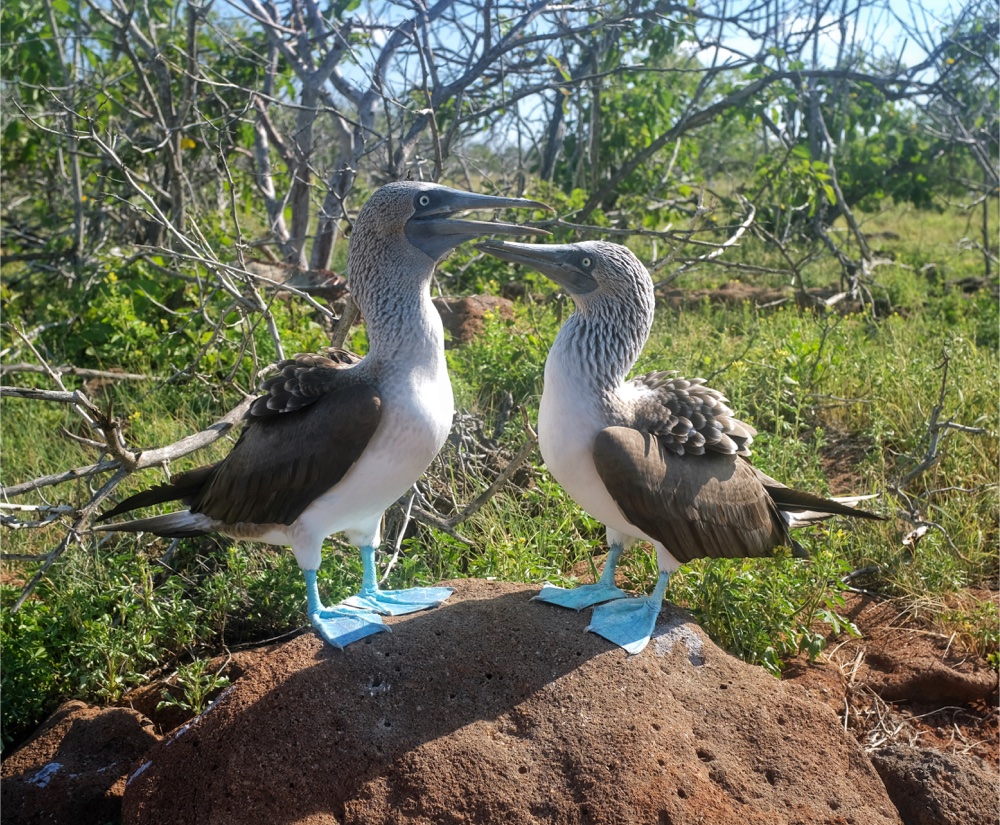 Snorkelling every day, a penguin nearly crashed into Lucy‘s mask, three mating eagle rays circled Jan, a black-tipped shark swam straight at us, and we played with sea lions who would pretend to swim into us and then dart away at the last second!

On our last evening, we got a beautiful view after climbing to the top of Bartolomé. It was hard to say goodbye to the boat that had become our luxury home and our fellow passengers who had become our temporary family. We made plans to meet up again — for drinks the next night, in Germany for Christmas and in the Dominican Republic one day in the future!

Luckily, we still had another week left to explore! First up was Las Grietas, a deep fracture filled with cool brackish water where we sat and watched spotted eels swim around our feet. After that, Tortuga Bay where Lucy rescued black carpenter bees from certain drowning, Jan napped alongside iguanas, baby sharks and marine turtles swam in the shallows, and a finch pinched Lucy‘s spot on the towel the second her back was turned.

Scuba diving, we hid behind a rock as tens of black-tipped sharks circled a cleaning station. We watched a mobula ray, also called a giant devilfish, casually swimming above our heads and we were overjoyed to see hammerhead sharks, with their crazy features!

On Isabella, we walked to the Giant Land Tortoise Sanctuary, past flamingo lagoons. 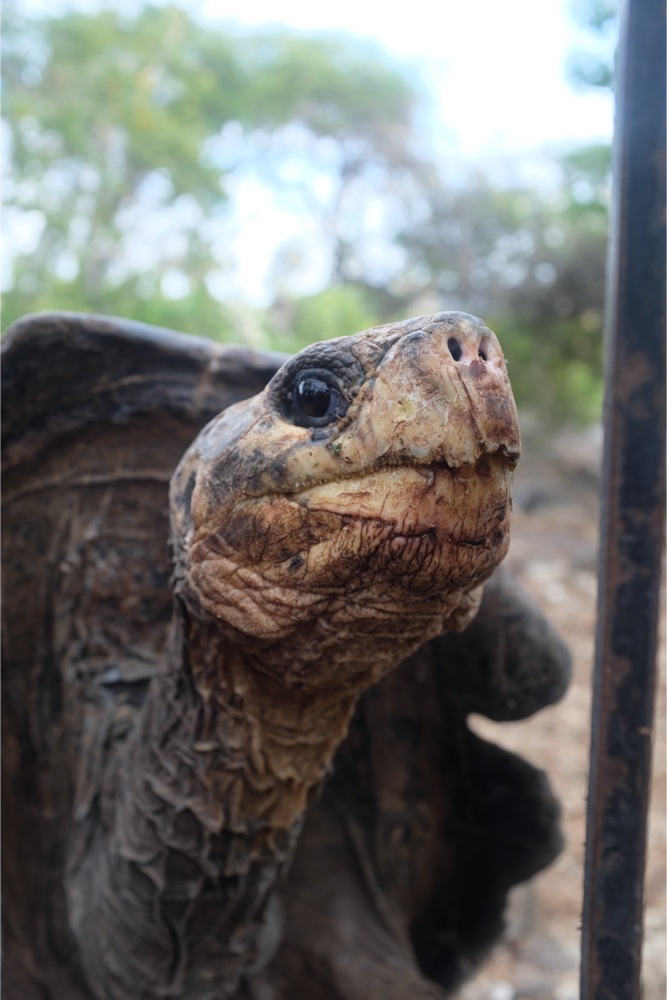 Hiking up the Sierra Negra volcano, we enjoyed the shiny ash particles and otherworldly landscape. 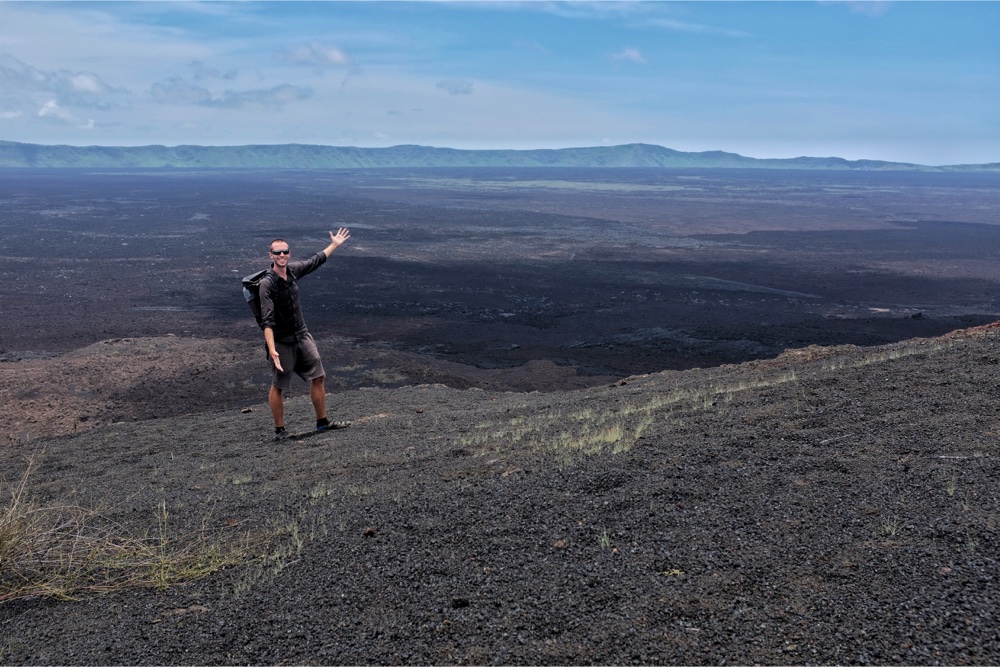 We cycled to the Wall of Tears, a memorial left standing for those who were imprisoned and suffered on the island. The mangroves offered a chance for a cooling dip and on our way out we heard crashing and cracking as a Giant Land Tortoise slowly but steadily went directly through tree branches rather than around them. 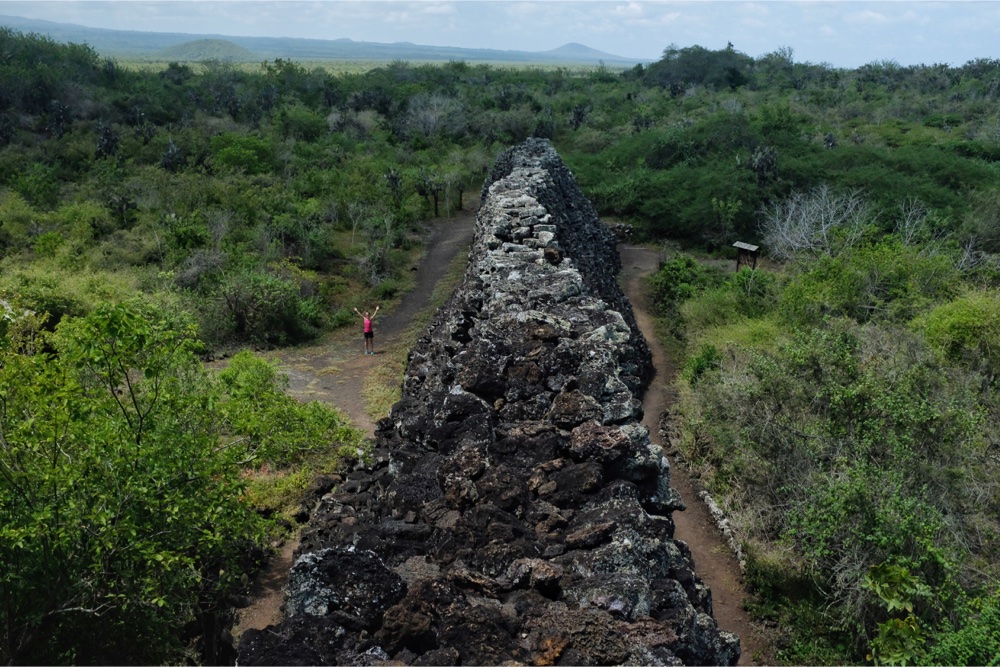 Our final day we planned to have a pretty normal, chilled beach day. Impossible on the Galapagos! Arriving at the beach, all but one of the eight benches were taken by sea lions, basking in the shade and avoiding getting sand in their nooks and crannies. Jan did not want to sit on the sand like the other humans, and made a beeline for the one remaining bench. The second he sat down, there was a huge commotion and a very disgruntled sea lion ran/flopped up the beach, leapt on the bench beside him and pushed him off the edge with its nose! 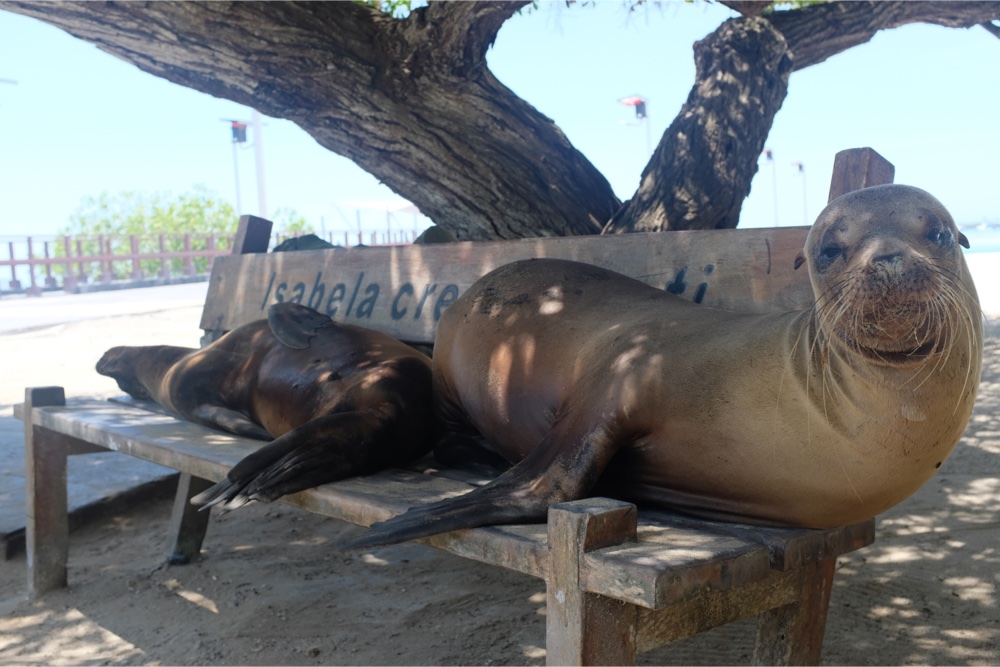 It was a great reminder that the animals are in charge here, and we are just temporary visitors, incredibly lucky to get the chance to see such a beautiful, unique and mind-altering place. 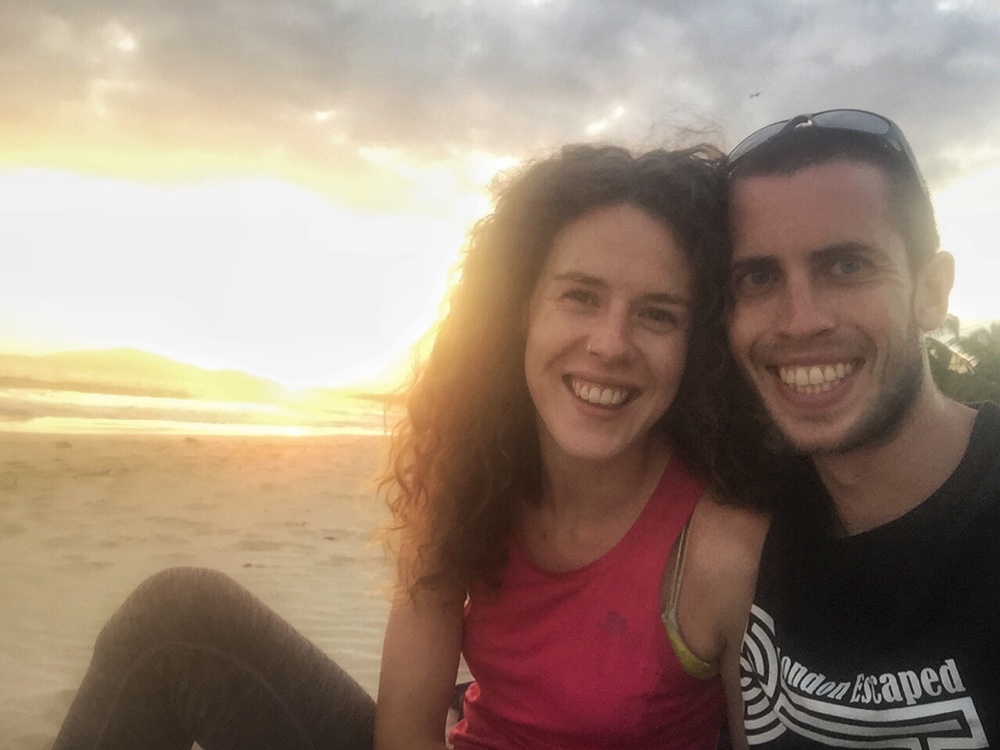 6 thoughts on “Galapagos – A side trip”