From the Redwoods to the Golden Gate

A small blue sign marked the entrance from Oregon to California, the last state of our Pacific Coast route. Shortly after was a checkpoint. A border control between states? Yes! The import of any fresh produce into California is illegal. For a second we were worried we would be arrested for smuggling kale and other vegetables in our panniers but, as usual, being on bikes didn’t register as a (produce related) threat and the border police waved us by. We were in Cali! 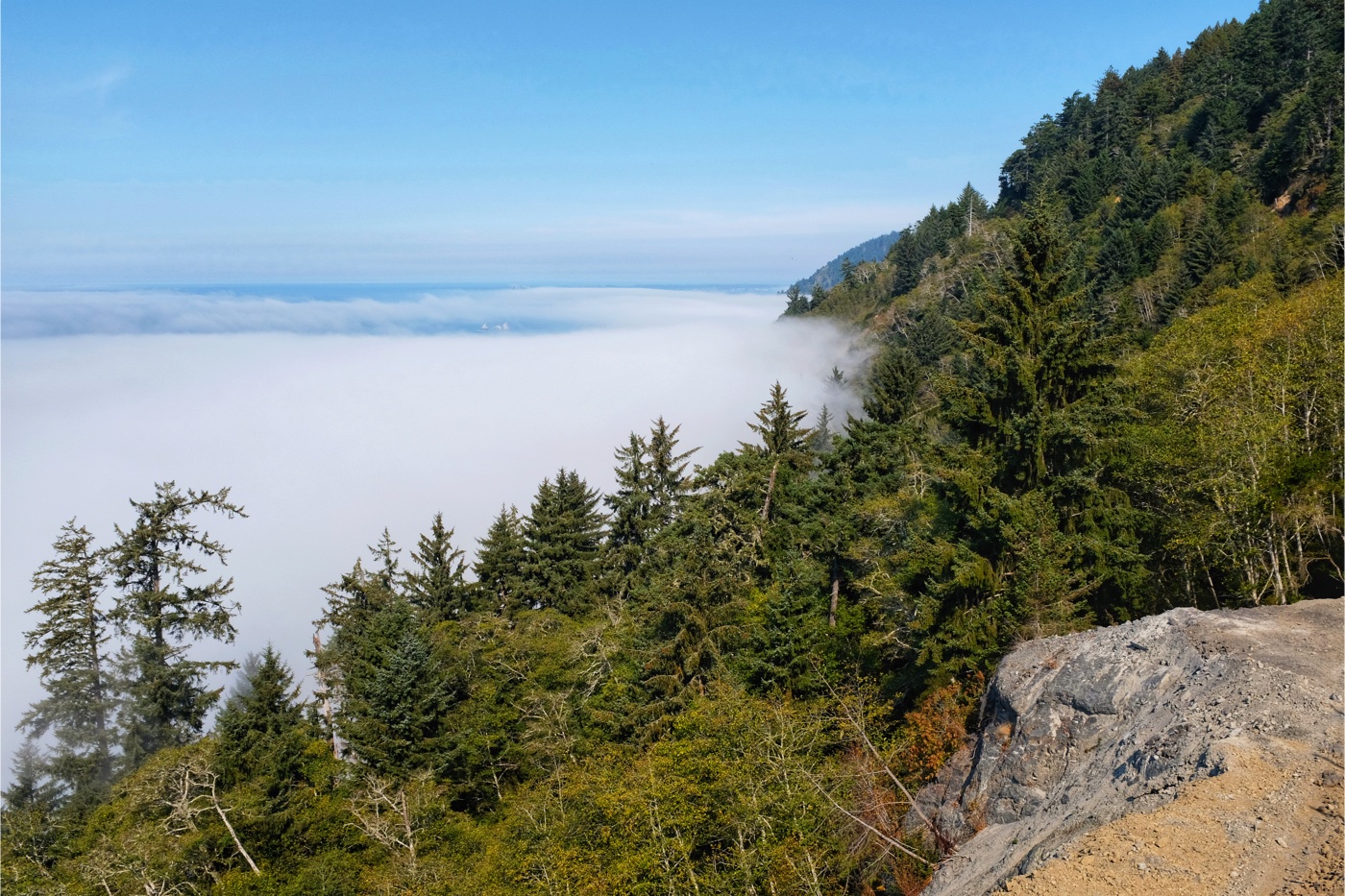 Known as the “Golden State”, California has 840 miles of coastline, sending us through multiple climate zones on our way from the cold and foggy north to the tropical south. Challenging our luck, we decided to camp our first night South of Crescent City on the beach. The foggy north delivered on its name. We still decided to make the best out of the beach day.

It didn’t take long before we hit the first batch of redwood trees. These majestic trees are the tallest in the world, some reaching 116m (379ft) into the sky with an age of over 2500 years. Cycling among them is humbling – we felt like small creatures in a prehistoric age. 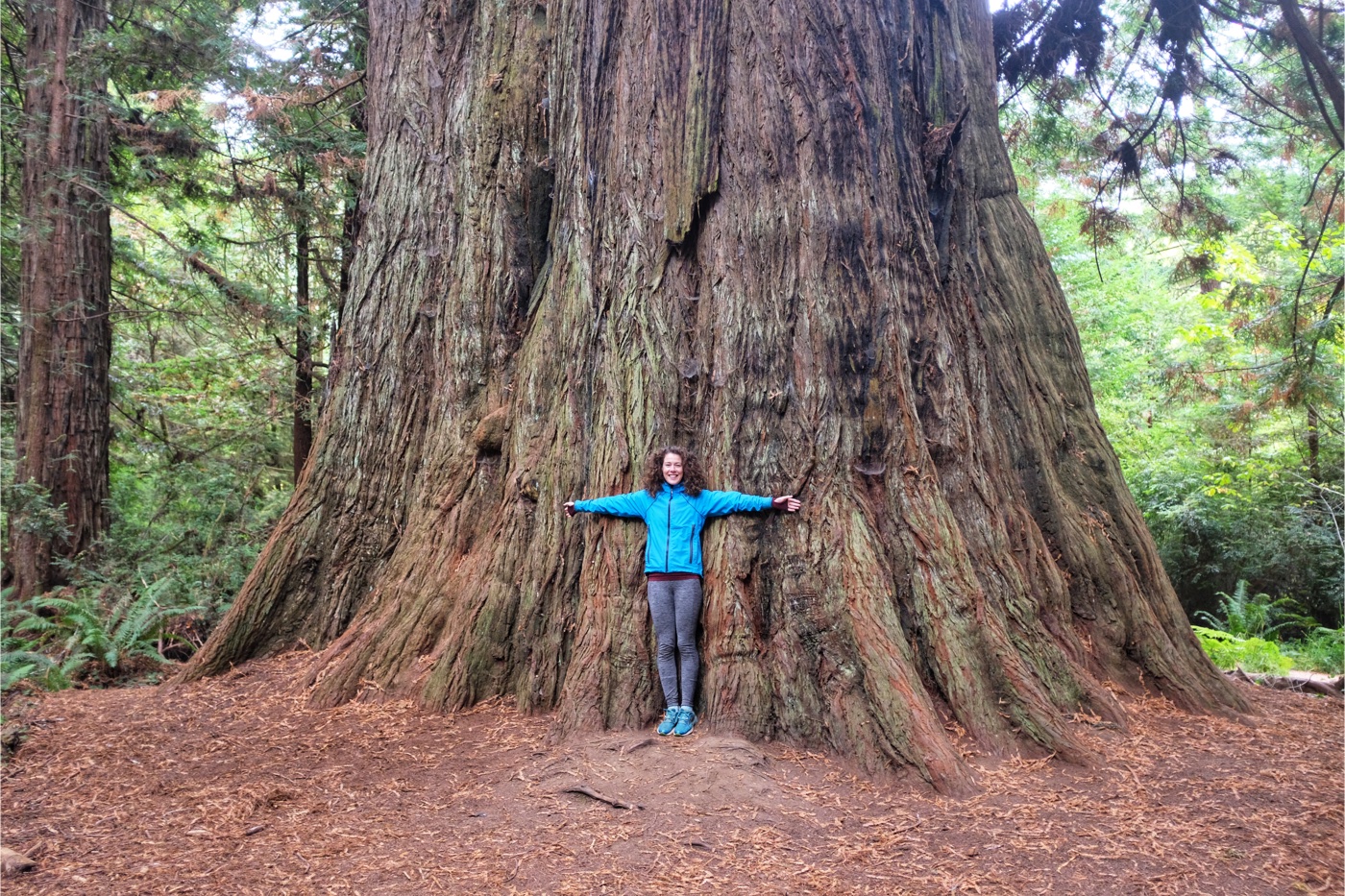 One of the best roads was appropriately named “Avenue of the Giants”. Sadly this road was also the avenue of tiny brains as big pickup trucks more than once cut or nearly ran us over.

This experience is shared by many cyclists travelling this route and we would regularly be reminded that it only takes one idiot on the road to give the whole section a bitter flavour. Many sections are narrow and for every ten cars that will overtake with appropriate distance, one will purposefully try to scare you off the road. Pairing this with (many) US citizens’ fondness for massively oversized vehicles, being it Ford/Dodge/etc pickup trucks or camper vans, big enough to carry AC/DC plus roadies on world tour, cycling becomes more hazardous than in most other countries we’ve been so far. Safety lies in numbers and it always felt good to team up with other cyclists. Matthew joined us over the hills through the redwoods, as in awe as us. Stopping here and there for little walks, we stayed at one of our favourite campsites: Elk Prairie. 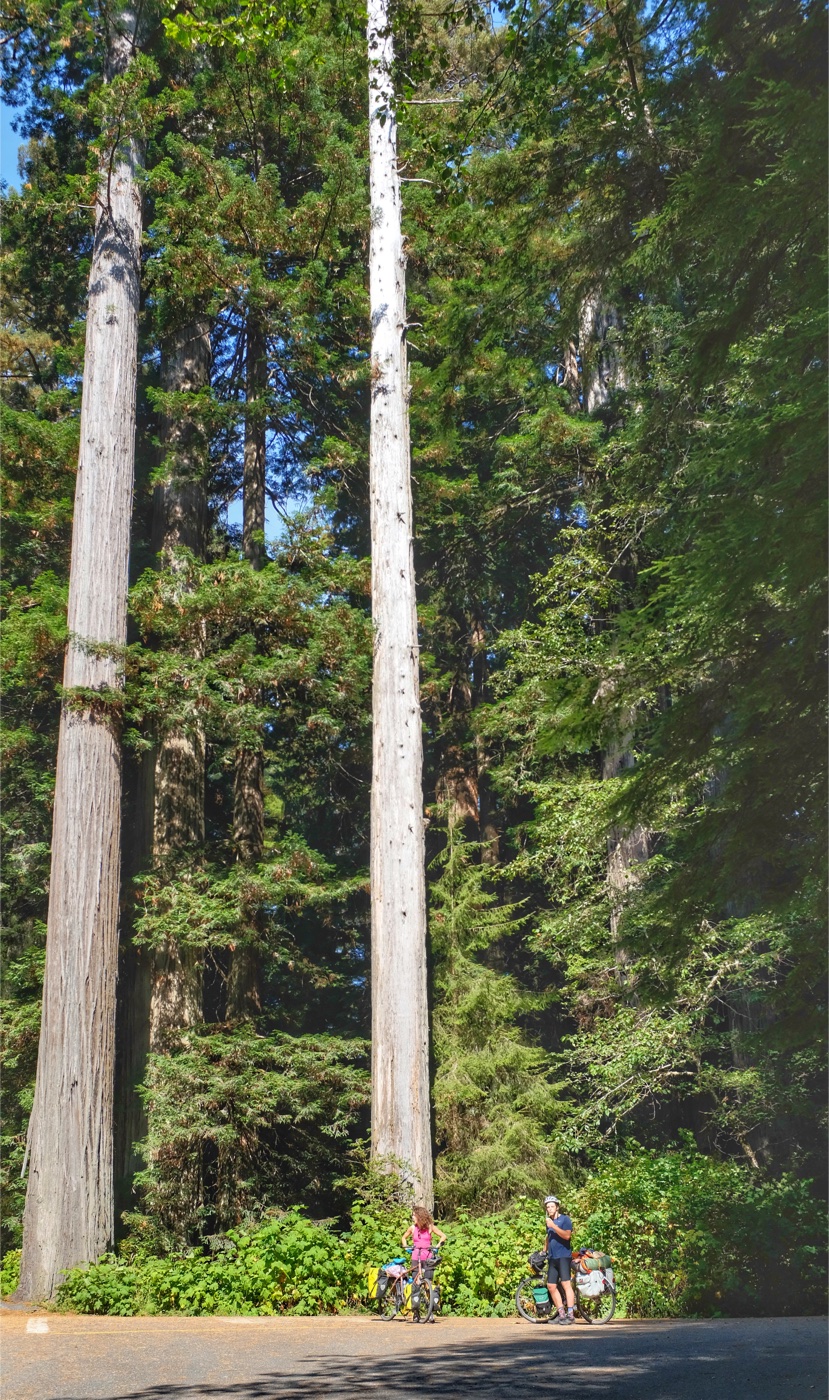 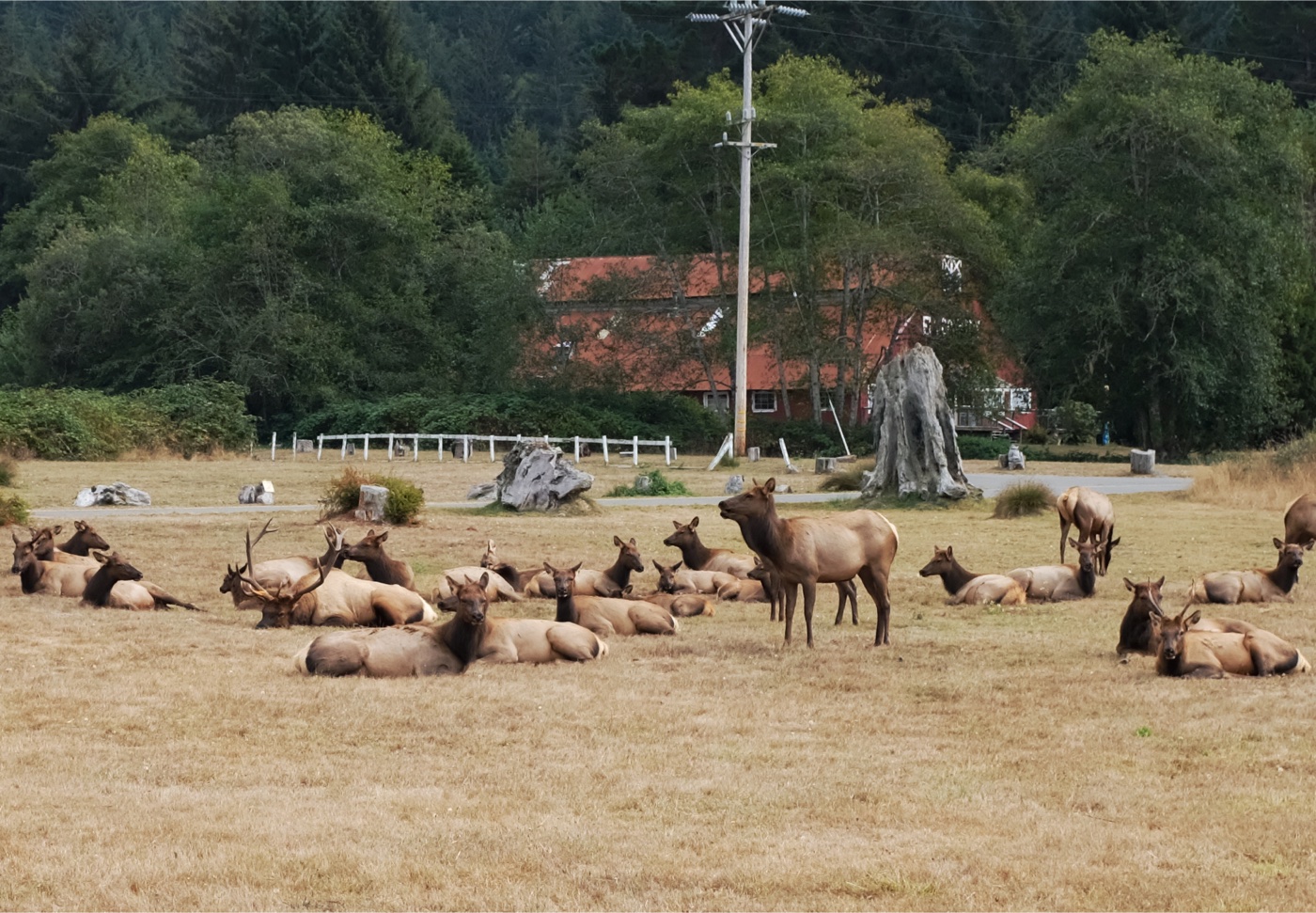 The wet and shady climate is perfect for trees, not so much for campers. After a few nights, all of our gear was damp and had developed the distinct wet dog smell. After a short break in the small town of Trinidad, staying with our wonderful host Carol, it was time to return to the coast and leave the redwoods behind. 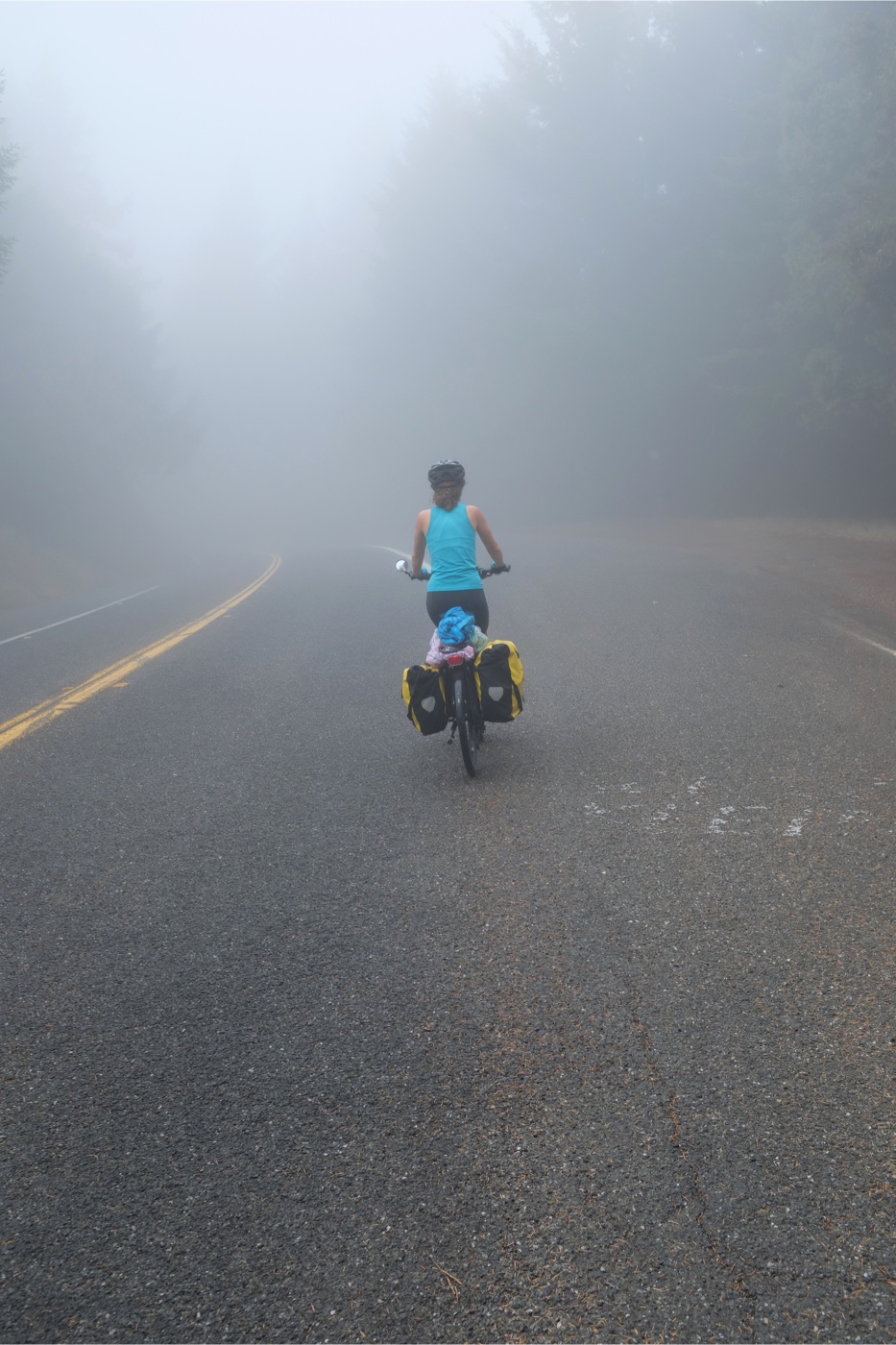 Still foggy, we blasted down route 1, meandering along the coast over many hills, through tiny towns and a tree corridor that made Lucy happy. As the weather got better, the views got more stunning.

It was hard pedalling for a few days but there was word of an oasis a few hundred miles away that kept us going. A luxury destination, a campsite with pool, hot tub and open kitchen was waiting for us. The private campsite company KOA, usually way over our budget, had cut a deal on one of their sites and had agreed to let cyclists stay for the top tier state park fare of $10 per head. With this carrot dangling in front of our noses, we smashed the last miles and optimised our daily itinerary to ensure maximum time in the hot tub. 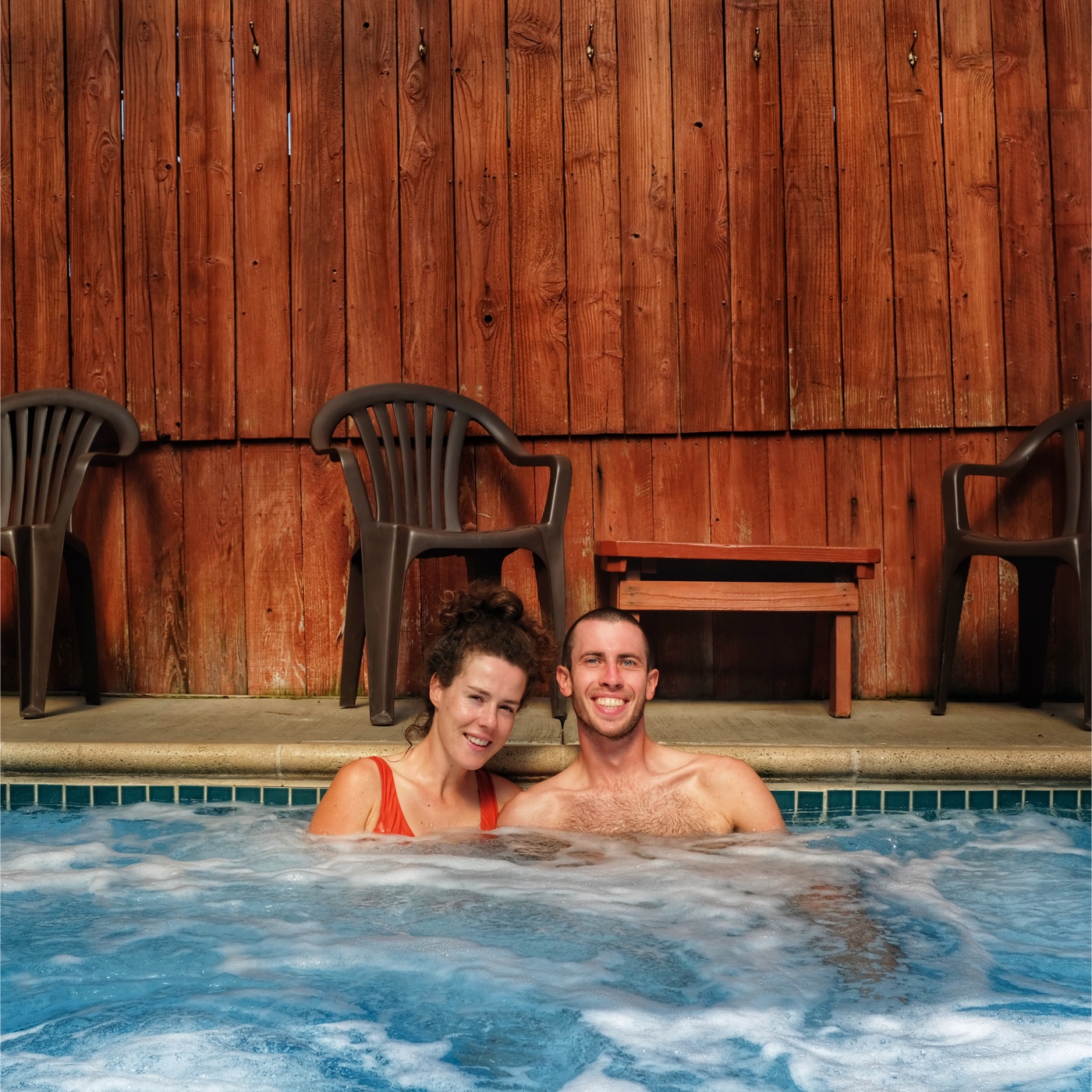 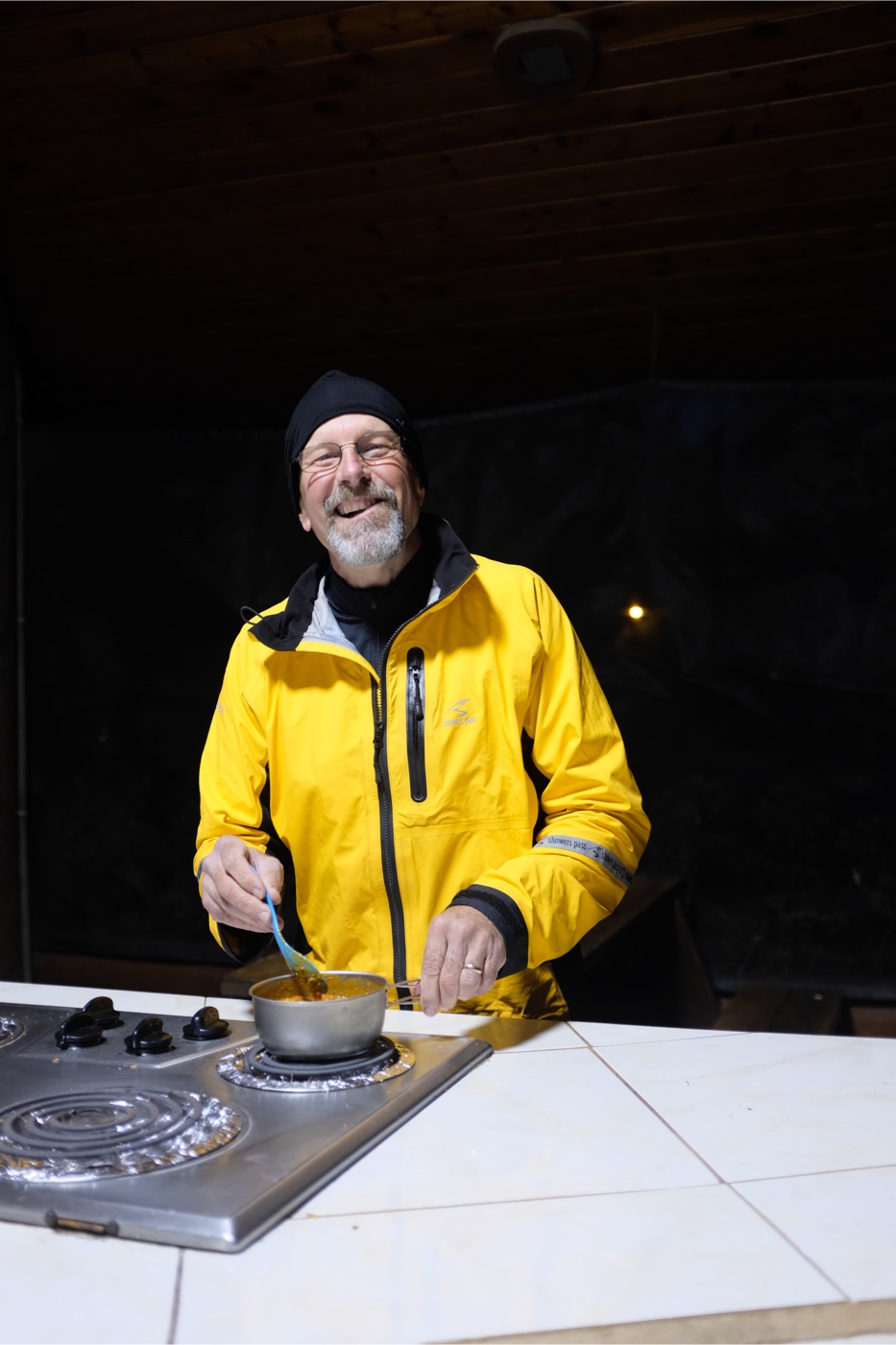 Less than 200 miles now separated us from our first big city in California – San Francisco. The route continued along the coast. The sun was beaming, the temperatures rising. For the first time in weeks, we cranked out the sun cream. 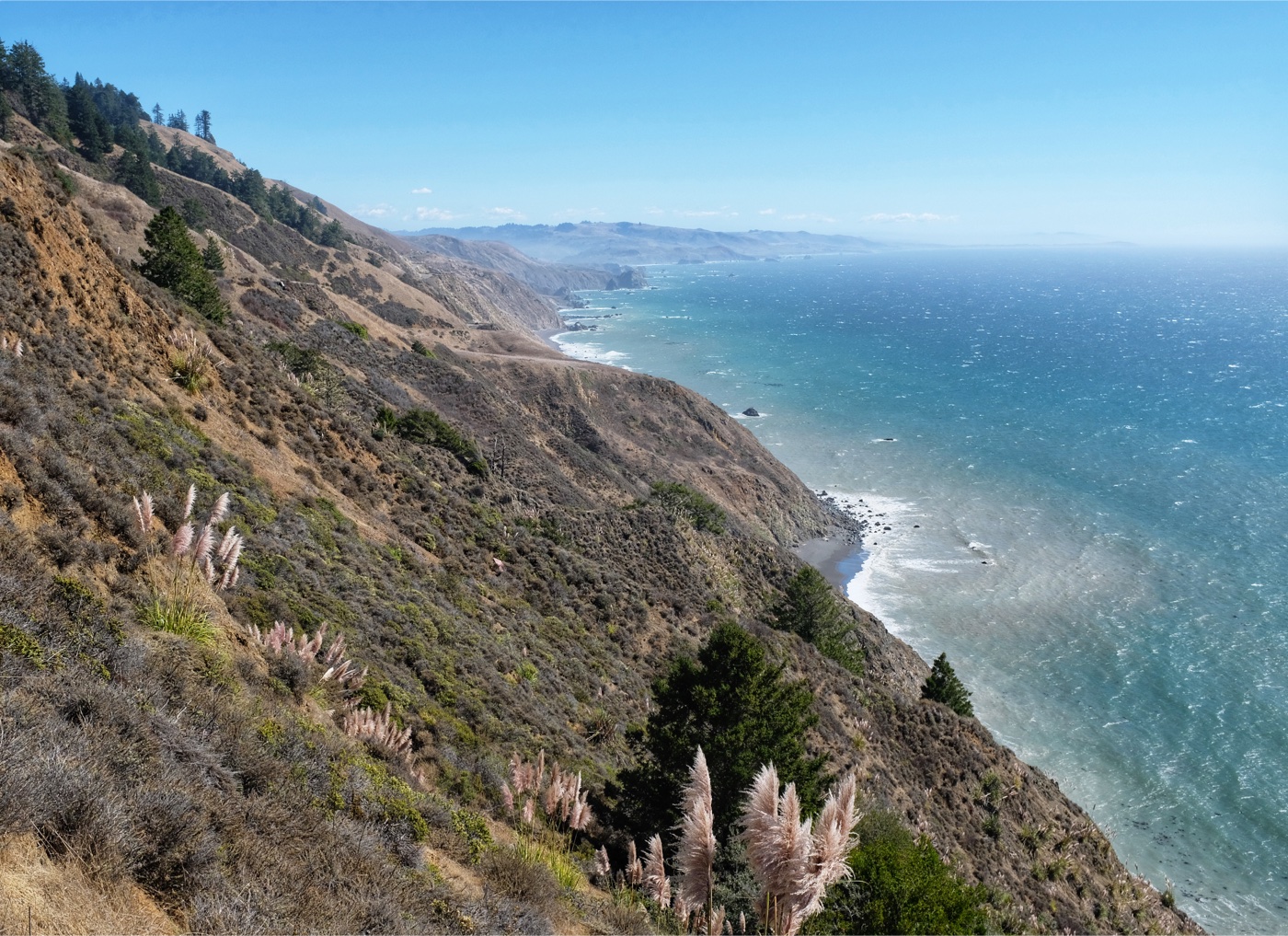 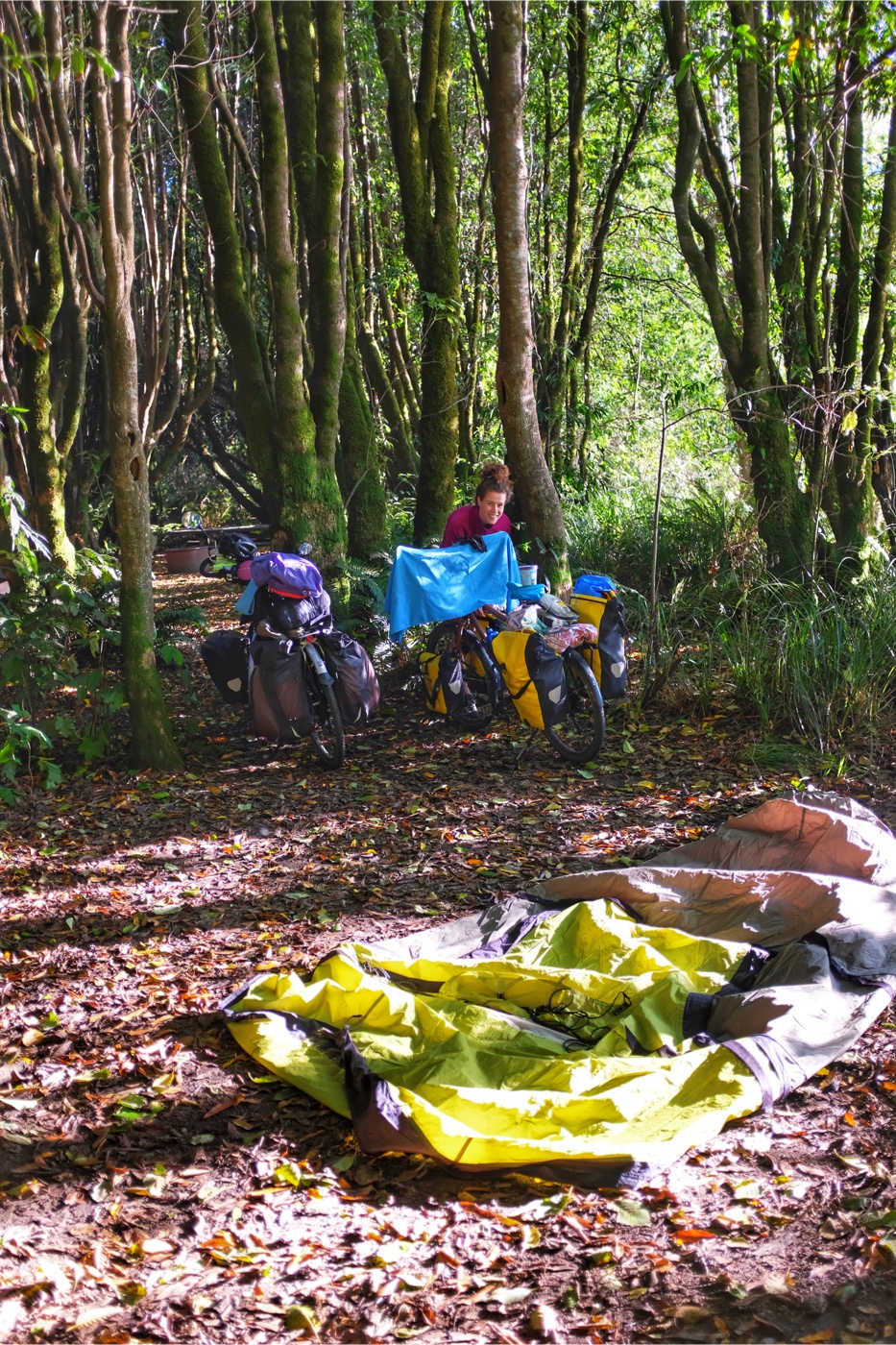 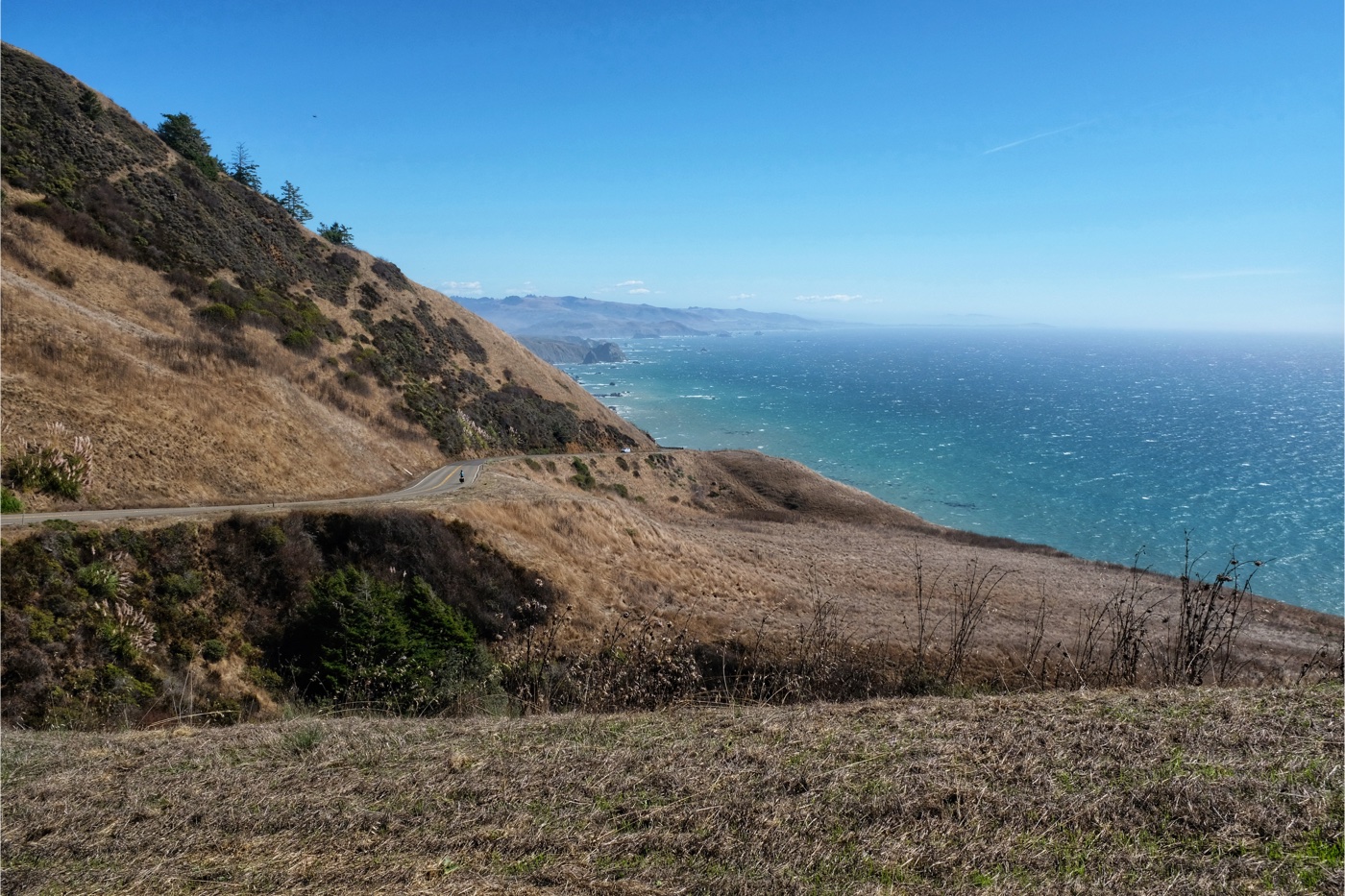 Suddenly a serious road cyclist appeared, then another one. And another one. It was the weekend and without noticing it we had become part of a big bike race – one of many that the Bay Area city folk like to participate in. Stuck between carbon frames and lycra-clad weekend riders in colourful team outfits, we had no choice but to race them on our fully loaded tourers. While Jan took pride in overtaking a couple of them on an uphill, the volunteers on the designated water checkpoint laughed at the bizarre scene.

Upon reaching the urban sprawl of the bay, the infrastructure got a lot better. Cycle paths appeared and cars drove more cautiously. Zig-zagging through San Rafael and Mill Valley, we reached the wonderful cycling path along Sausalito, giving away a first shy glance of the most iconic bridge in the world. A few climbs later we stood at the viewpoint, overlooking the Golden Gate. 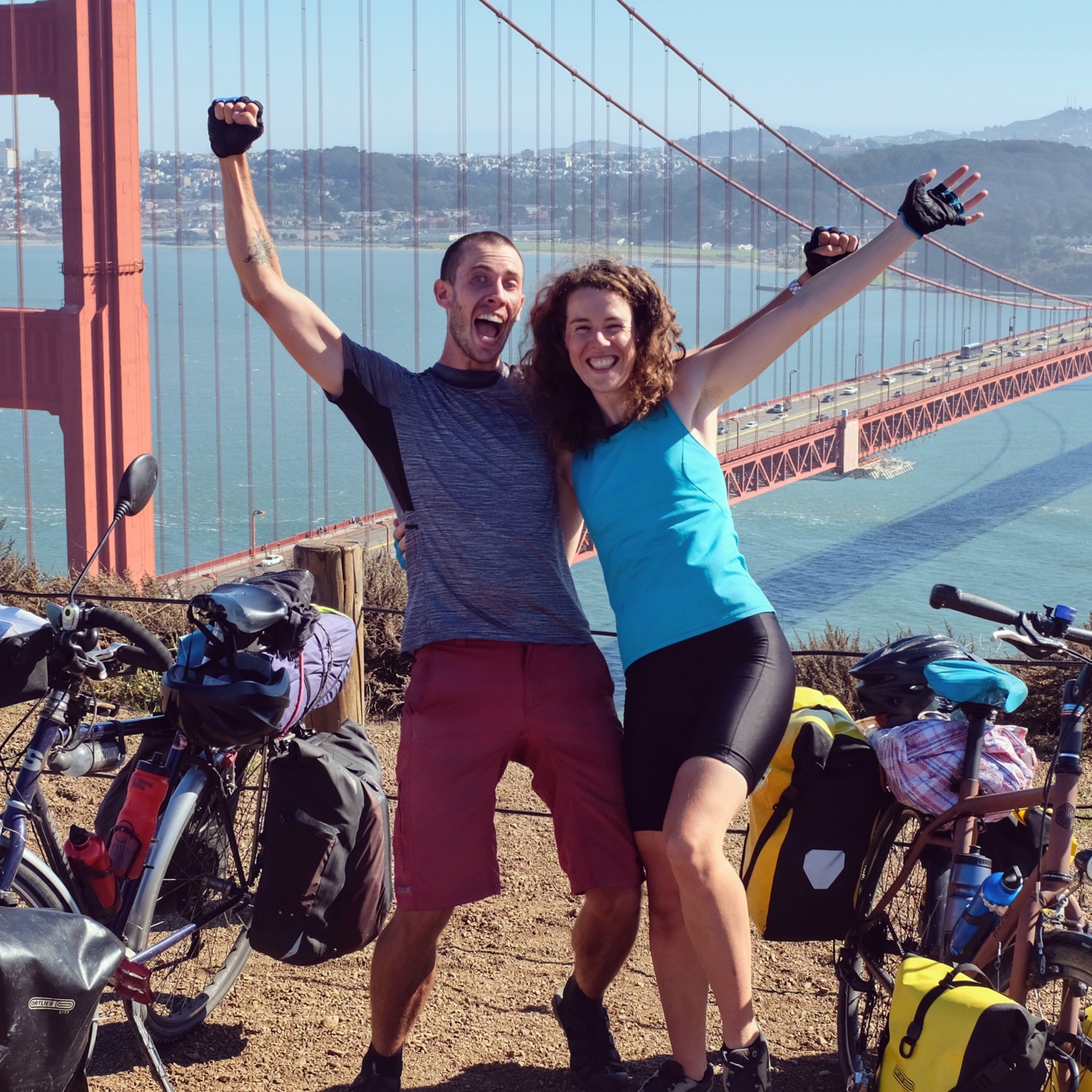 In San Francisco, we had the pleasure to stay with Rob, who made us feel at home from the first minute. Sharing the passion for good food, we cooked delicious meals together and chatted away.

After grinding down the coast, we were keen to take a few days rest, getting some bike repairs done and reflect on our trip through the states and what would lie ahead. By the end, we made a somewhat radical and controversial decision…

A few words on the pacific coast route:

For being one of the most ridden and most famous long-haul cycling routes of the world we couldn’t shake the feeling of slight disappointment. A lot of time is spent on highways, traffic is heavy, sometimes light, but always present. We can’t imagine how it would be in high season.

With campsites widely available and very little opportunity for wild camping (everything is private property with angry signs), you always travel in a pack, which can be positive if you prefer fixed destinations and seeing the same faces every evening, but can chip away from the individualism and adventure that is so unique to bike travel. In short, there is very little surprise, unless you plan ahead for it.

We have been on the bikes for over a year now and our best memories are always of people and their kindness. In the USA, our experience and encounters with people is a story of extremes. We met some of the most generous and caring people, some of whom fed and housed us, some who were just happy that we had chosen to cycle through their country. However, as mentioned, a lot of drivers were appalling. Some not purposefully, they were just bad drivers (overtaking on hills without visibility, cutting blind corners, etc.), but a few were outright mean, swearing and shouting from rolled down windows or coal rolling us (feel free to google it). A few individuals actively tried to run us off the road, which was only prevented by quick reactions on our part. In no other place have we encountered such a degree of road rage.

Maybe it is the high number of cyclists, maybe the subpar infrastructure, but in our eyes, the pacific route through the states doesn’t hold up and is probably better experienced off the bike.

Nevertheless, we were happy to have done it, but what lay ahead? A bit of research showed that we could expect more urban sprawl, more freeway, more costly accommodation. We reminded ourselves that we were doing this trip for our enjoyment and not to prove anything, so felt comfortable jettisoning the second half of California, packing the bikes and heading to the airport. A new destination was chosen and all our plans for the next months changed.